Claudio, the horologist, called yesterday afternoon to let me know my Bulova was repaired and ready to pick up. I told him I’d be in before closing and found myself needing to call him back a few minutes later to ask if he also makes copies of keys. He does and he did before bringing the watch out. 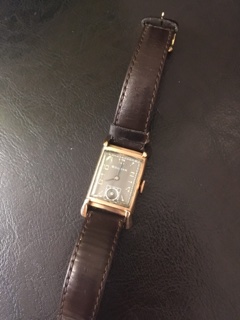 “May I?”
I held out my wrist. Serious, he stressed that because it’s strictly a dress watch, I need to keep it away from water, which everyone knows, but I also need to keep it away from electricity and started his explanation with “The hairspring is the watch’s heart…”
And that word choice, coupled with the gallant intimacy of someone else fastening my own jewelry onto me, effectively cancelled out the physics (chemistry?) lesson I thought I’d be taking away.
Along with the watch I took away the three key copies (for which he said, “No charge”) and the keychain with the mini-flashlight he also threw in, stating that it “should be used to illuminate the doors” I’d be opening.
The person who received one of the keys shortly after I left the shop admired the flashlight keychain. I had to tell her I couldn’t give it to her, that I’d acquired it only 15 minutes ago, and yet it was already imbued with sentimental value.
So, yes, I recommend Claudio’s Watch Repair.